We plan and implement strategies for the controlled growth of Roane County’s economy as a unified voice representing the best Tennessee has to offer businesses, citizens and travelers.

We attract travelers who seek unique heritage and the best outdoor recreational experiences to Roane County.

We connect leaders and organizations for the beneﬁt of local and regional business growth.

We empower leaders, parents and students to invest in education, so they are better prepared to fulﬁll the workforce opportunities of Roane County’s future.

We offer natural beauty, historic charm and low-cost living, distinguishing Roane County as one of the best retirement destinations in the nation.

Last month, the Tennessee Department of Tourist Development announced another record year in  their 2nd largest industry – tourism.  Visitors coming to the state spent $23B in 2019, generating $5B in payroll for hospitality jobs and nearly $2B in state and local tax revenue.  In that same report, the state announced that 92 of the 95 counties also experienced growth from tourism.

Roane was one of those counties, with $74.23M spent by visitors in our county for a 4% increase over the previous year.  Because of tourism, there were 6 new hospitality jobs created, for a total of 486 jobs, with close to $13M being paid in payroll.  $8M in state and local taxes were generated in 2019 because of what the visitors spent, giving every household a $394.72 savings on their taxes because of what those visitors spent in Roane County.

The state realized a much higher growth in travel spending compared to the entire US, as well as a growth in tourism jobs and payroll, and generated tax revenues.  And though Roane County didn’t increase quite as much as the state in those same categories, we were within 2% of the state’s growth and in turn had 17% more growth in travel expenditures than the US and 43% more growth in payroll.  Job growth in the hospitality sector also increased 4% more than the US average, with those 6 new jobs mentioned previously.

“And the beginning of 2020 started out as another record year for the state and for Roane County – but we all know the rest of that story,” said President Pam May, the Roane Alliance.  “And per the state’s most recent announcement ‘the pandemic is the single largest crisis to hit the [tourism] industry and halted a decade of growth for Tennessee.”

Added May, “The state understands how important tourism is, not only for the entire state, but also for each of the 95 counties.  It was a blessing when they announced the relief program’s funding would go directly to each county, allowing us to step up our marketing efforts at the most important time.”

The Tennessee Department of Tourist Development, in partnership with Governor Bill Lee and the Financial Stimulus Accountability Group, shared $15M of the CARES Act funding with the tourism agencies in all 95 counties.

“Roane County received $53,740 in CARES Act funding, based on the most recent amount of tourist expenditures the county received,” according to Communications and Marketing Manager Kaley Hill, Roane Alliance.

Added Hill, “We were excited to get the news about the funding, and we are proud to partner on the state’s ‘For the Love of Tennessee, Travel Safe’ campaign.  We are busy planning and executing our own marketing projects and advertising to help Roane County.  Given that we just launched the new Get Outdoors campaign to promote recreation, we are positioned to do well, thanks to the state’s support, and are looking forward to helping bring visitors back to Roane and the state.” 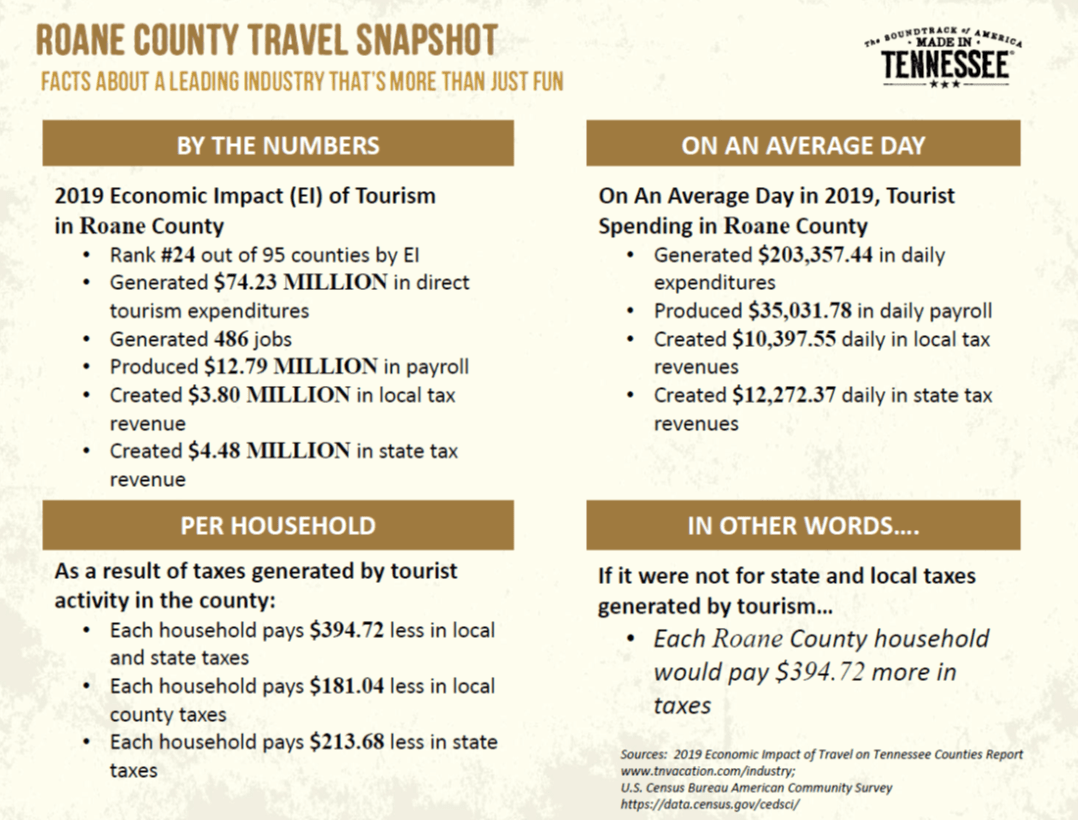 A Unified Drive. A United Force.